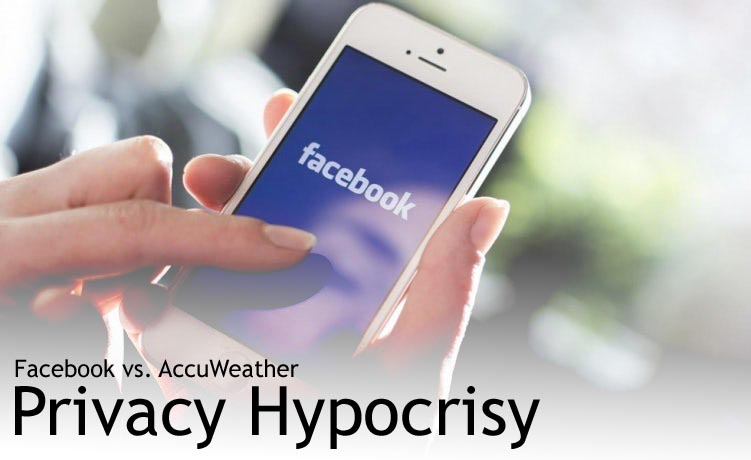 AccuWeather was recently accused of selling user data to third parties, even after users disabled the location function. In response, people exercised a ridiculous level of hypocrisy by uninstalling the app out of outcry for privacy — but the same people continue to use Facebook. The general public seems to be completely uneducated about the privacy risks associated with using smartphone apps and the internet. AccuWeather is actually the least of the bag guys, when it comes to collecting personal data of users. Facebook is perhaps one of the worst privacy violators, notorious for collecting and sharing personal information, in some cases reaching a creepy stalker-ish level. Why aren’t people uninstalling Facebook, if violation of privacy and sharing personal information is really a major deal breaker for app users? More attention is needed towards large app and social media companies, particularly from lawmakers and internet security experts.

So you’re ready to uninstall the AccuWeather app, but what about the other apps you regularly use? Are they collecting and selling your personal information, web history, location, and other data? AccuWeather may be the least of concerns when it comes to internet privacy issues. Companies know your information is worth money and some are doing anything they can to get it, even if it means violating laws or disguising their actions under the guise of serving you with a “better experience.”

You would think people were finally taking action against companies that are unethical with user privacy and security concerns, especially when you hear that users were uninstalling an AccuWeather app because their privacy wasn’t respected. It seemed as if users were sending a message by uninstalling the offending software. After all, you do have a choice in the matter – keep the software or uninstall it.

The app people are outraged about is called “AccuWeather – Weather for Life”, which is basically a free weather forecasting app from AccuWeather, Inc.

Despite users turning off location data, the iPhone app continued to send router data, including georeferenced location data. Turning off geolocation functions doesn’t necessarily disable details about your location – they can come from other sources. Your home router, metadata, or even the information you enter could allow an app to determine a very precise location.

AccuWeather did respond to internet outrage by updating the app to remove the location collection functionality, if you believe their statement given to TechCrunch. Oddly, the company also plans to “reinstate” the very function that everyone is upset about, once they figure out how to use it and what privacy policy updates are needed.

Some say AccuWeather at least responded to accusations of privacy intrusion by removing the function, while others say this is just another case of a company getting caught and being forced to do something about it.

If you’re mad about AccuWeather’s app privacy issues, you should be fuming about Facebook. Where are all of the people uninstalling Facebook for its ridiculous and overstepping intrusion into personal details of its users? The amount of personal data people give up to Facebook, both knowingly and unknowingly, is astonishing.

Previous stories have highlighted how as much as 7 out of 10 smartphone apps collect personal information. Most of the things people willingly install on their smartphones will collect personal data and share it with third parties.

No other app seems to come close to just how much and what Facebook collects.

Inc.com once wrote a story, titled “You Won’t Believe All of the Personal Data Facebook Has Collected on You.”

In fact, the total depth of exact collection details seems to be a secret. Facebook isn’t telling users the exact details of what data it collects and how it uses it.

Despite not knowing every single exact detail of what data Facebook collects and shares, tech experts have a good idea of what users are giving up by using Facebook. By using Facebook, the information users can expect to be collected, shared, sold, manipulated, and referenced by Facebook and third parties includes:

Facebook privacy issues may only get worse. Imagine Facebook buying a DNA company, such as Ancestory.com, and then linking it to the profile of its users. Facebook could then manipulate and automatically connect people – reaching a new level of creepy. A recent story really makes you think if this might already be happening.

Imagine a company like Facebook collecting so much data about you and then offering it to an employer search database. What if employers searched the database for the information Facebook has on you to make employment decisions?

Such a large collection of personal details could be used to manipulate political figures, blackmail, destroy competition, start wars, and many other terrible things. Internet users have legitimate concerns with their privacy and personal security. The legal language inside of privacy policies and lack of transparency, especially among the largest companies (like Facebook), will likely require some kind of congressional attention. Federal, local, and state lawmakers should do everything they can to maintain a standard level of user privacy – with the user taking priority over the company.

Users should be aware of how their information is collected, who its being shared with, and what to do to reduce the privacy risks. Concerned people can start by uninstalling software that doesn’t respect privacy. Find an alternative app that doesn’t collect as much or is at least transparent with their privacy policy. The ability to turn off functions that collect private details is a plus, but only of they actually work. There are other things you can do to maintain privacy: use a fake name, turn off location data, don’t post personal information, keep a separate email/account for social media, use private browsing, and use encryption.

Read the privacy policy of everything you install – or at least review it so you have an idea of which software collects your data. You may even want to write to your senators and representatives to voice your concerns and demand for action on internet privacy. The best defense is a good education on internet privacy and taking action for yourself.

Related reading: Are you aware of the privacy and security you give up by simply using Facebook?