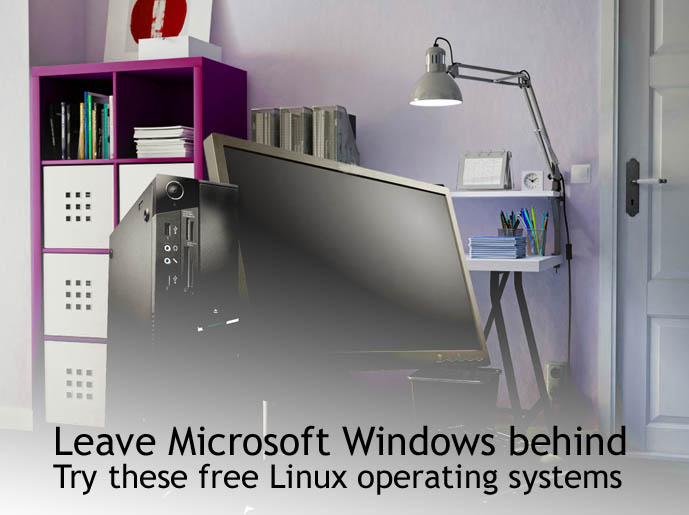 Are you tired of Microsoft Windows 10 yet? There are numerous security issues with Microsoft Windows 7 and Windows 10 operating systems. Some of the privacy concerns have gained so much attention that Microsoft just recently tried to backtrack its snooping features by pushing an update. Users are getting tired of their every move being tracked by Microsoft, especially by default. In fact, most Windows 10 users probably have no idea just how much information they’re giving away to third parties. You can take more control of your privacy and leave Microsoft behind by trying these free Linux alternatives.

Linux is an operating system that comes in many versions. It was first introduced in the early 1990s and quickly become popular, especially among computer experts. The operating system is the software that handles the hardware communication of your computer. All of the things you plug into your computer, including firmware, are driven by an operating system. In fact, Linux is so popular that it powers most of what you use, such as smartphones, cable TV boxes, watches, smart TVs, tablets and other connected devices. Unlike Microsoft Windows, Linux offers multiple open-source operating systems that are free for personal and commercial use.

You might also note that most versions of Linux can be installed on just about all desktops or laptops made within the past 10 years. More popular versions of Linux, such as Ubuntu, offer extensive generic drivers and pre-installed software packages that can support most modern devices, touch screens, printers, CD/DVD burning, multimedia codec playback, USB, and Wi-Fi communications.

Linux is more secure than Windows. Not only is Linux more secure, the open-source community constantly works to improve it, often communicating (really listening) to end users, unlike Microsoft. There’s a huge amount of computer experts that rely on Linux because it’s much more secure than Microsoft. Microsoft makes you pay for partition and full disk encryption, Linux doesn’t. In fact, you can encrypt your home folder on install with the free Ubuntu Linux operating system.

Some people are so used to Microsoft that they think it’s impossible to walk away from it. Think of the main things you do with your desktop or laptop PC. If you primarily browse the web, use Microsoft Office, PowerPoint, Word, Outlook, simple graphics editing software, browse photos, etc., then a switch to Linux will likely be smooth. Linux offers free alternatives for word processing, graphics editing, file management, desktop icons, web browsers, and email programs. Unless you rely heavily on special products that can only run on Windows, then you won’t miss much. Just imagine leaving Microsoft, saving money, taking control of your privacy, and becoming a smarter PC user. Don’t be afraid to leave Microsoft and never look back.

There are many free versions of the Linux operating system, complete with pre-installed word processing software (no more buying Microsoft Office or trial versions), graphics editors, games, web browsers, email program, file manager, and more. Just like Windows, you can customize the look of Linux desktop windows. If you really like the look of Windows, there are add-ons for Linux. Best of all, the documentation and free online support of popular Linux operating systems is extensive, free, and constantly updated.

Note: To install a free Linux operating system just follow the instructions from the official website(s) below. Before formatting or installing Linux on a current Windows machine, you should backup any files because Linux will overwrite whatever was previously installed, including the Windows operating system. If you’re an advanced computer user with knowledge of manual OS install, partitioning, and dual boot, you may install Linux with Windows on the same computer. Carefully consider your options. Ideally, you will save your files on the existing Windows machine to an external hard drive, install Linux, and then move back your files afterwards.

Ubuntu is one of the most popular Linux operating systems today. ULTRA TechLife recommends Ubuntu as a great transition operating system to go from Windows to Linux. Ubuntu comes with everything you need to run your organization, school, home or enterprise. All the essential applications, like an office suite, browsers, email and media apps come pre-installed and thousands more games and applications are available in the Ubuntu Software Centre.

The purpose of Linux Mint is to produce a modern, elegant and comfortable operating system which is both powerful and easy to use. This is used by millions of people, is very popular, and stable.

If you like Red Hat Linux, but don’t want to pay for the enterprise version, consider CentOS. The CentOS Project is a community-driven free software effort focused on delivering a robust open source ecosystem. For users, we offer a consistent manageable platform that suits a wide variety of deployments. For open source communities, we offer a solid, predictable base to build upon, along with extensive resources to build, test, release, and maintain their code.

Debian provides more than a pure OS: it comes with over 43000 packages, pre-compiled software bundled up in a nice format for easy installation on your machine.

If you’ve left Microsoft Windows and are now a Linux user, congratulations. If you’re still on Microsoft, be sure to read our privacy and security analysis – it’s bad. Do yourself a favor and leave Microsoft behind.