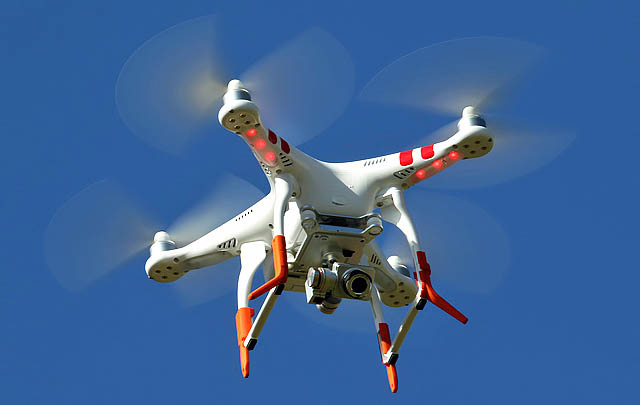 There were 198 airplane-and-turtle collisions, since 1990, according to the federal government’s own databases. Science and statistics (the facts) suggest that there is a wave of baseless mass hysteria articles trying to scare people about drones bringing down airlines. Many experts will also point out that all of the “near miss” reports remain unconfirmed and that drones pose no greater risk than small birds. In fact, planes hit objects all of the time and there is no reason to further regulate hobby drones, if you consider the actual facts and science behind such an idea. Passengers should be more worried about striking one of the 10 billion birds flying in the United States than a small plastic drone.

More airplanes are hit by turtles than drones, since 1990, according to the Federal Aviation Administration. This has even been reported before by Popular Science, so why not ban turtles, call for more turtle regulation, or start a turtle registry? Turtles don’t fly, but this should put the drone hype into perspective. In fact, there has not been a single confirmed case of a drone colliding with an aircraft. The baseless hysteria over drones and “near misses” is misleading law makers and the American public. Using the federal government’s own databases, there is absolutely no evidence to suggest that the average hobby drone is of any significant threat to commercial aircraft.

Drones are in the news again and there are new calls for more excessive regulation, which seems to be the typical American public and politician knee-jerk reaction (based out of fear and ignorance) to anything these days.

According to a widely cited UAS Safety Analysis study in 2014, the idea of drones posing any more of a threat to aircraft than an average bird is baseless. About 151,305 strikes were recorded in the Federal Aviation Administration’s Wildlife Strike Database, since 1990. Only 9% of these cases resulted in any notable damage to the aircraft and 0.15% resulted in an injury or fatality. The expert opinion, based on aviation, engineering, and statistics, was that an unintentional impact between a drone and aircraft is extremely unlikely.

The average consumer hobby drone cannot fly at the speeds and altitudes of commercial aircraft. Meteorologically, winds can exceed 75 mph around jet stream altitudes (~30,000 feet), which would prohibit drone operation at those heights. The temperature at such an altitude would also cause problems for the average drone, rendering it inoperable. Passengers should not be concerned about hobby drones taking down their flight at cruising altitude.

The Institute of Electrical and Electronics Engineers (IEEE) recently interviewed George Morse, a leading expert on foreign-object damage to aircraft. Morse runs a company that does engineering tests on foreign-object damage, such as nuts, bolts, birds, etc. He says drones are less threatening than birds because they don’t fly in flocks. Morse also mentions that most drones would probably break apart if they hit an engine. Morse also says the most important consideration is where the drone hits the engine and the speed of the turbines at the time of the strike. The conclusion was that hobby grade drones are not a significant threat to aircraft, in comparison to bird strikes.

A typical quadcopter, such as the DJI Phantom 3, is a popular hobby drone, especially since it’s listed below $1,000. It weighs about 2.6 lbs with the battery. Its maximum speed is 35 mph with a maximum flight time of about 25 minutes. Most hobby drone materials are usually plastic and or carbon fiber body and parts. Lightweight parts are required so the small propellers will lift and move the drone. 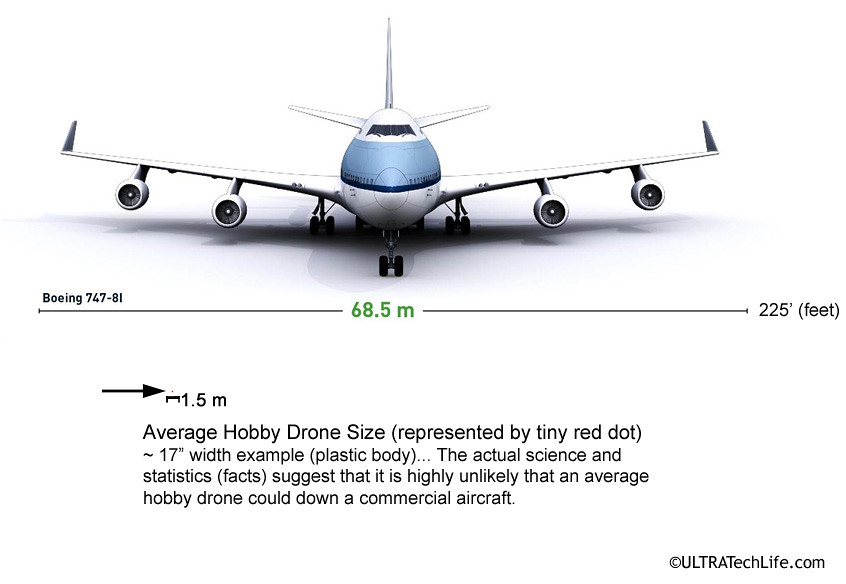 Consider the size of a small hobby drone verses the size, build material, speed, and altitude of a commercial jet.

Most of the sensationalism and misleading news titles that often prompt people to demand more laws are a direct result of ignorance and fear. The fear comes from scientific ignorance from a lack of an evidence-based perspective. If one considers the actual statistics, the average hobby drone is not a significant threat to commercial aircraft. Additionally, as of this date, there is no evidence of a collision with a hobby drone, only unconfirmed reports.

It is highly unlikely that a small piece of plastic weighing 2 lbs is going to bring down a commercial 747 airliner weighing 800,000 lbs (400 tons). Cruising altitude for commercial aircraft is often 30,000+ feet and their air speed can exceed 500 mph, far beyond the reach of any hobby drone. Temperatures at jet cruising altitude (30,000-40,000 feet) ranges from -40° F to -70° F (-40° C to -57° C), typically. Consumer hobby drones would not survive the below freezing temperatures of such an altitude and their average radio control signals would not be sufficient to control the drone.

Consider the size of a small hobby drone verses a jet engine.

The truth is that aircraft are most vulnerable to strikes from drones during takeoff and landing. Regulations already exist to prohibit hobby drones from operating near an airport runway or restricted area. Larger commercial drones are regulated. Some of the larger commercial military grade drones can operate at higher altitudes and speeds. However, there is no reason to believe that a commercial entity or America’s own military would ever operate one of their drones in a way that could endanger a passenger aircraft.

The massive difference in size, materials, and speed mean that the average hobby drone isn’t going to destroy a commercial passenger aircraft. The public must understand that most, if not all, of the drone news stories have involved unconfirmed reports of near collisions with drones. Each year, more airplanes hit turtles than drones. Decisions should not be made based solely on fear and ignorance. There is no need for passengers to worry about hobby drones when flying on commercial aircraft.

Airplanes hit birds, hail, and other objects all of the time, often unreported by the media. Commercial aircraft are built to survive most situations and you are generally safer flying than driving in a car. Anything can happen, but it is still unlikely that a small hobby drone will bring down a giant passenger plane. There is no need for more laws or excessive hobby drone regulations. However, there is a need for more people to actually understand why the statistics and science (facts) that suggest this is the case.