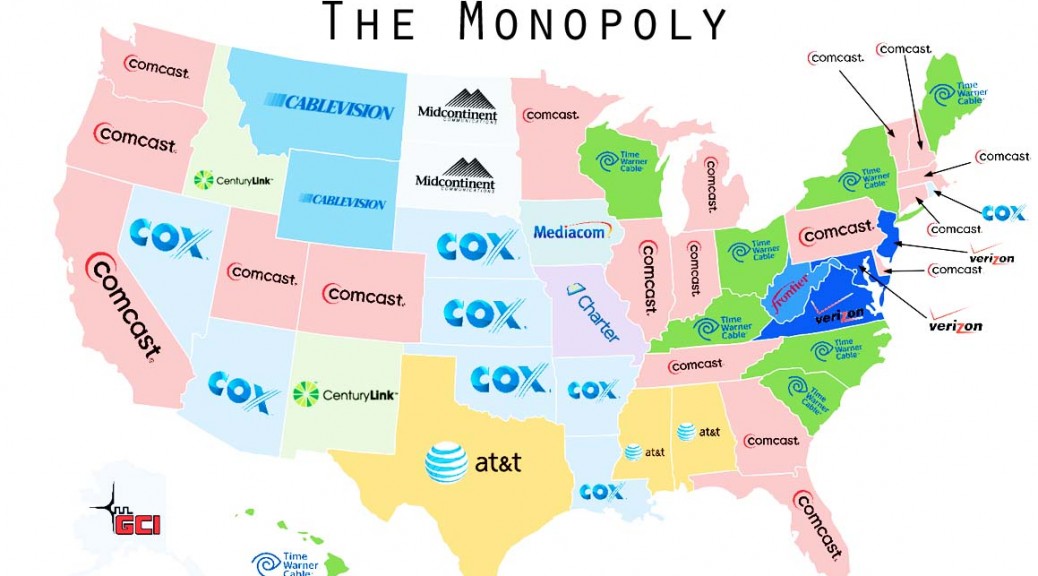 A global internet connects us all, is a part of modern life, and is required for basic survival, education, health, entertainment, and communication needs. Every human deserves unfiltered high speed internet access as a basic human right. Regardless of your political stance, the internet has become one of the most widely used communication mediums in the history of man. At the same time, a global technical literacy problem keeps people from understanding just how important the internet has become for basic living and future survival. Worst of all, there are many governments around the world working to limit access, increase surveillance, and ultimately decide what people can think and do, a global threat to science, education, peace, and progress.

Many people simply don’t understand how important the internet has become for survival. In fact, I’ve often explained to my students that it’s such a unique and utilized medium that it will become universal in the future and you likely will not be paying for internet access, at least like you do today. I argue that even unethical companies and future governments will want as many people to be connected as possible through free internet just as a way to increase surveillance of citizens. This shocks people as unbelievable – for some reason.

There are many political arguments that still go on, even in more developed countries like the United States, such as whether citizens should have healthcare as a basic human right. But the internet is a similar argument that many don’t see as a parallel for survival.

A 2019 Pew Research poll suggests 90% of US adults now use the internet. If we look back to 2000, that number was 52%, still impressive. This just highlights how important the internet has become – it’s a part of life.

A 2015 United States Census survey suggests that 77% of households had broadband internet service. I believe this number is underestimated and has obviously increased since then. In addition, and for another article, we need to redefine “broadband” to describe exactly what 2020’s broadband speeds actually mean. The internet is a huge part of life and it’s becoming even more central to everyday living.

How Critical is the Internet for You?

Nearly everything you do today requires internet access. Think about that. Your basic survival and getting ahead in life means you must have a high speed internet connection.

Are you looking for a job? You need to search for one and fill out a job application online.

Are you needing health advice? Many people search for health advice online, finding providers, signing up for insurance, and even doing remote sessions with doctors now (requires an internet connection at home).

Are you wanting to get educated? Short of on-site laboratory courses, nearly every kid of modern education can be conducted online (as if you were face-to-face in the classroom), which gives convenience to everyone. No driving to school, no need for a car, more convenient, flexible, and makes it easier for special learners.

Shopping? Half of all retail sales occur online now. In fact, shopping online could also be argued as a more environment-friendly approach to commerce.

Starting a movement? The internet is the way.

Starting a business? Most people find you though web searches. You need the internet.

This is hardly a comprehensive list of how critical the internet is to your basic survival. As you can see, you need the internet. It’s such a public utility that is required for basic survival, regardless of whether you are rich or poor. 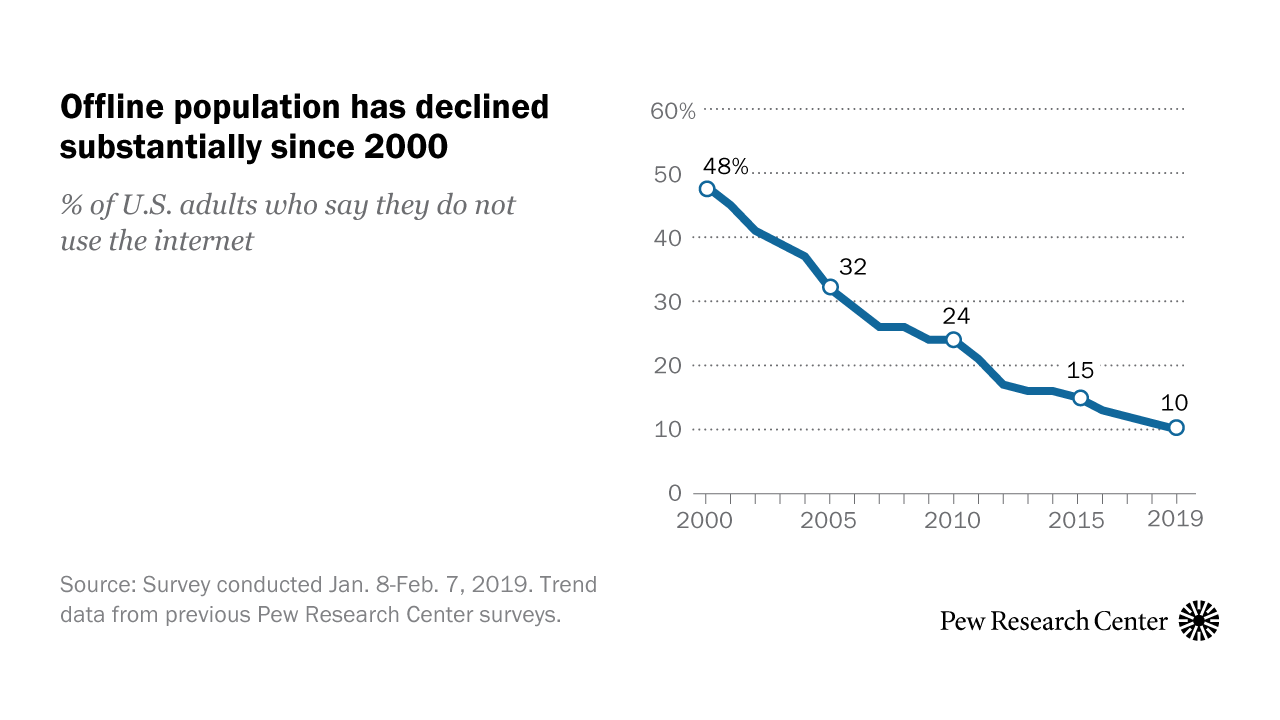 Pew Survey: Since 2000, offline populations decline to only 10%, which means nearly everyone is connected.
Recently, a presidential candidate (Elizabeth Warren) stated: “In the twenty-first century, every home should have access to this technology — but we’re not even close to that today. According to the FCC, in 2017 26.4% of people living in rural areas and 32.1% of people living on tribal lands did not have access to minimum speed broadband (25 Mbps/ 3 Mbps), compared to 1.7% in urban areas.”

A Digital Trends article also talked about her remarks because she specifically highlighted how internet service providers were using sneaky maneuvers and anti-competitive behavior. Low income populations also experienced a disparity in service, which needs to be addressed.

Without a good level of technical literacy (technology education), many will not know how to safely use the internet or avoid trouble on it, including managing their own privacy. That’s a huge issue today. Next the technically literacy issue of the masses, many don’t understand why the internet should be free for all as a basic human right and why it’s better to be unfiltered access.

The Internet Should Be Unfiltered

Imagine a government entity filtering your every thought, looking for thought crimes, and having someone else decide what you can and can’t think. It’s a dictator’s dream, but totally opposite of freedom and basic human rights. That’s why filtering should be left up to the individual to do, not a government or third-party entity. It’s critical that ideas are free to flow because the benefits outweigh the disadvantages.

Unfiltered internet is critical because it facilitates the free flow of modern information, intellectual human development, and peaceful transactions that promote transparency, science, freedom, and community.

Many countries that are operating under dictatorships and brutal governments want total control over internet access for their citizens, including Russia. Recently, in April 2019, Russia passed the Sovereign Internet law, which gave its government the power to filter all access to the global internet in Russia. It’s another extrajudicial and nontransparent move, according to Human Rights Watch.

Some say public utilities are a natural monopoly and this is partially true. This is another reason why we need to rethink the whole public utility idea, transforming it into basic human right utilities. This shouldn’t be such a radical thought, but it is because people are unwilling to change from old thinking to new and improved ways. Public utilities should be universal for all, including health, water, and internet access. You need these services to survive.

We’re so used to living with monopolies for decades that we don’t even bother to see a way out of it. We must get over this old thinking and the internet is an excellent example why now it’s more important than ever before.

The government partially caused some of the biggest monopolies through grant funding. The corporations grew and felt they had nothing to owe to the public. The whole idea of public utility needs to transform into something modern. It shouldn’t mean automatic monopoly.

Back in 2014, Polly Mosendz wrote an interesting article at the Atlantic. It discussed some surface thoughts on the internet – it’s already a monopoly so why isn’t it a public utility already? And either way, the monopoly hurts us all and because of the internet’s influence on everyday life is of such an extent, it at least needs to be carefully looked at by the government to ensure affordability and equal access for all. But I will go much further than the sentiments in the Atlantic – monopoly and freedom cannot exist together. As a technology expert and professor, I’ve seen how internet service monopolies harm everyone. Students that are living paycheck to paycheck have to go use a free internet service at a fast food place to do work or look for a job because they can’t afford a home connection.

In fact, my own home internet bill started at a $29 promotional rate, then went to $34, then $39, then $44, $49, $54, $64, $75, and now more than that with taxes and fees – all in the span of less than 2 years of time. I’m personally experiencing the ISP monopoly. It’s old, outdated, unreliable, overpriced, and people are not happy. I know of families paying $400 a month for home internet and cable TV service (ridiculous). There are little to no choices, especially in some rural areas.

One huge barrier to low cost universal high speed internet access is the fact that unethical and potentially criminal monopolies exist. It’s the ultimate slap in the face to the average consumer because they have little to no choices for internet access. Nearly all modern content requires huge chunks of monthly data usage as well. Our infrastructure is also old in terms of internet cables in the ground and customer modem equipment.

In 2019, my company ran into a lot of old equipment. Basically ISPs were charging people for outdated equipment, their fees increased but speeds and quality of service didn’t. My company had to step in to fix the problem for many unsuspecting clients. After all, most business owners are not tech experts – but they are getting ripped off by monopolies.

“We’ve requested upgrades for many of our commercial clients because their Spectrum modem equipment (formally Bright House Networks) was approximately 6-10+ years old and had never been upgraded. The older equipment meant our customers were paying current high rates but limited to lower speeds because of outdated equipment. Many of our customers feel they are being ripped off because there’s little to no choices for service in their area. Service is also generally unreliable. And when the internet goes down for a restaurant, they can’t do many transactions. We also found they were overpaying for lower speeds. It’s 2019 and this is ridiculous.” – Ben Alonzo, Storm Sector, LLC CEO.
Watch an oversimplified version of how we got to so many tech monopolies. (Tru TV)

On the road to universal high speed internet access as a basic human right, we need to focus on giving people more choices for affordable service. If that means breaking up monopolies, so be it.

Here’s the interesting intersect that involves politics. Much of our problems today are a result of a Congress that lacks science and technology expertise. There are many politicians and lawyers, but nearly all of them lack sufficient science and tech education, skills, and experience to improve our country. This also means they are passing laws and taking money from lobbyists that don’t have the best interest of the people in mind. This is the reason why we have monopolies today. It means that you need to vote for smarter, technically/scientifically literate leaders. Our internet privacy issues are also out of control because of this very lack of technical literacy in government and the corporate world.

This is just an interesting subject to think about as we now enter 2020. I’m expecting this to become a hot topic because there are “bubbles” bursting soon and that means lots of unemployment, markets collapsing, and people being forced to transition to new forms of employment and education.