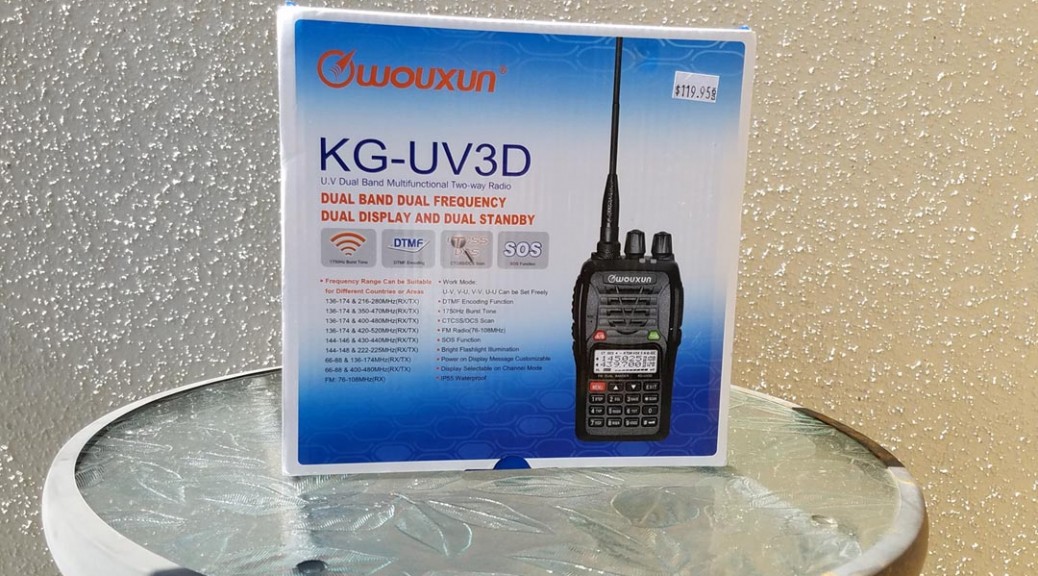 The KG-UV3D is http://brightstartravel.com.au/2019/06/10/golden-triangle-india-9-days one of the only ham radios available with a cheap AA battery back and car power adapter option (both about $14 each). Universal, dirt cheap accessories are also available for this radio all over the place online. It performs well as far as receive and transmit capabilities. Radios like this would be neurontin online no script good if you’re getting into ham radio, camping, fishing, going on a road trip, participating with Skywarn, or even getting into the emergency prep lifestyle. It’s not the top-of-the-line, perfect radio, but you just can’t beat the price or capabilities. Here are some thoughts about the radio as well as tips for people looking for the right budget ham radio handheld.

Ham radio can be expensive, but it doesn’t have to break your bank account. If you’re a new ham radio operator or even someone that participates in Skywarn or emergency communications, you might consider the Wouxun KG-UV3D. It’s around $100 and covers the most popular 2 meter and 400 bands with some great, cheap accessories. If you’re camping or storm spotting, it’s always good to have multiple power methods. Wouxun offers a cheap $15 AA battery pack, a vehicle power adapter (battery eliminator for $15), and a universal speaker microphone for about $15, giving you multiple ways to power your radio in an emergency. It does a good job receiving signals – great for listening to NOAA weather radio or Skywarn nets. Although it’s not the most expensive, high performance commercial Motorola rig, it gets decent signal reports and does well on simplex. It holds a charge for a pretty good amount of time, even when powered off for a long time. It’s also pretty easy to operate and is compatible with the free CHIRP ham radio programming software.

The best ham radio handhelds are going to have great receive, wide scan capabilities, long lasting batteries, and a durable design. People want a good bang for their buck, especially when the economy isn’t doing so good right now. There are a lot of budget radios out there but most of them are junk. They may boast about features, but they fail when put to any serious test. Thankfully, there are a few decent radios out there, including the KG-UV3D series. People want a quality product, not a toy.

Next to those qualities, most people start mentioning programming difficulty (how hard the radio is to use). Wouxun is generally easy to program or edit, even from the keypad (field programmable). If you do program the radio with Chirp, be sure to first do a “read” from the radio to the computer to download the current data. This makes sure there is less of a chance for error and that your cable is properly communicating between the PC and radio.

This is really a good radio even for the experienced ham radio operator. You might not get a local warranty, but at the price nobody really is invested that much to care. If you do purchase from a major retailer, they can work with the manufacturer to either repair and replace/change the radio. As always, it’s a good idea to take care of your gear so it will last. Store it in a climate controlled area or protective case. You should be good to go.

As far as commercial use, if you were a volunteer fire individual, this might be a decent personal radio, but don’t expect it to be the same quality as a Motorola APX unit. These budget ham radios are not really built for the everyday demands of commercial activities – use it sparingly. For example, if would be hard to operate this radio with any gloves on and dropping it might cause it to stop working completely. In rural areas, for volunteer staff on a budget, this would be decent. Be sure that you are authorized to operate on the frequency.

This is an excellent overall budget ham radio product, especially for new ham radio operators. It’s a radio you can keep for a long time or take with you everywhere you go. Wouxun’s KG-UV3D has some decent specs. We’ll mention some room for improvement after some details about power, receive, battery, and other functions.

This is a 136-174/420-520 (if unlocked by programming cable) TX/RX radio. Power is 5 watts on high and 1 watt on low. It’s IP55 waterproof rated, but don’t keep it under any significant amount of water for extended time periods. There’s 128 memories, which can be given alpha-numeric tags. It can also tune FM radio (76-108 MHz). This is FCC Part 90 certified, grandfathered with a technicality for the new 2.5 KHz requirements. It may not be approved for use with CAP or other agencies. Frequency steps include 5-100 kHz. The display and DTMF keys are backlit (great visibility). The standard DCS/CTCSS encode and decode capability works great. The radio can operate in several modes, including V/V or V/U because there are two alpha-numeric lines to display the frequency information. However, it’s best to operate in single frequency/display mode as you can only transmit on one frequency at a time. It does not offer cross-repeat. It does have a VOX function. Apart from the stock antenna, the radio’s dimensions are average for its class, around 2.3 x 4.1 x 1.6 inches. The standard battery supplied is a 1700 mAh battery pack. The antenna is a reverse SMA type bendable duck. Audio output is pretty decent, around 500 mW at full volume. You can expect up to 14 hours listening (non-continuous traffic) and about 2 hours of time with 80/20 listen/talk out of a full charge – that’s not bad. They do include a drop-in rapid charger in the retail box. Two programmable side keys (function keys) can be set through the menu. The radio does have a small LED (flashlight) on the top as well as a receive and transmit indicate LED. You can also change the screen colors in the menu, which is kind of cool. Some sellers are marketing this radio in a locked 144-148/420-450 range, so make sure you verify whether it can be unlocked or not with the programming cable and software. The Ham Radio Outlet model can be unlocked with the cable and software for 136-174/420-520.

If the manufacturer is listening, there are a few things that would really improve the radio, making it even better for the ham radio market. First, adding AM aircraft receive would dramatically improve the selling point for the radio, if the price stayed the same. The receive sensitivity could also be improved, including a more accurate signal meter that reflects the actual signal strength. Commercial improvements could include the addition of 2/5-tone encoding and decoding for volunteer fire departments. The radio’s belt clip could also be improved with a more durable design. Finally, adding a bit more than 128 memories would help give people more space to store their frequencies.

This is an excellent budget ham radio/commercial radio handheld. It has so many cheap accessories available, giving you more cheap options for power in an emergency. It’s a great camping radio or even a good tool for Skywarn monitoring. The fact that you can buy so many cheap accessories, including the AA battery pack, car power adapter, universal handheld speaker/microphone, and the dirt cheap programming cable, means it’s a great option for entry-level ham radio operators or the emergency prep types out there. The radio sells for around $99 at most ham radio retail locations. Accessories are generally below $20 each. Although it’s not a top-of-the-line radio, it gets the job done for the purposes of ham radio communications. You can’t beat the price or cheap accessories.

Download the free CHIRP programming software: Get the latest version of the software CHIRP to program your ham radio model