Ask a Professor: Is it a good idea to only use Snopes or Wikipedia for college research and how can I become a better skeptic when fact-checking? 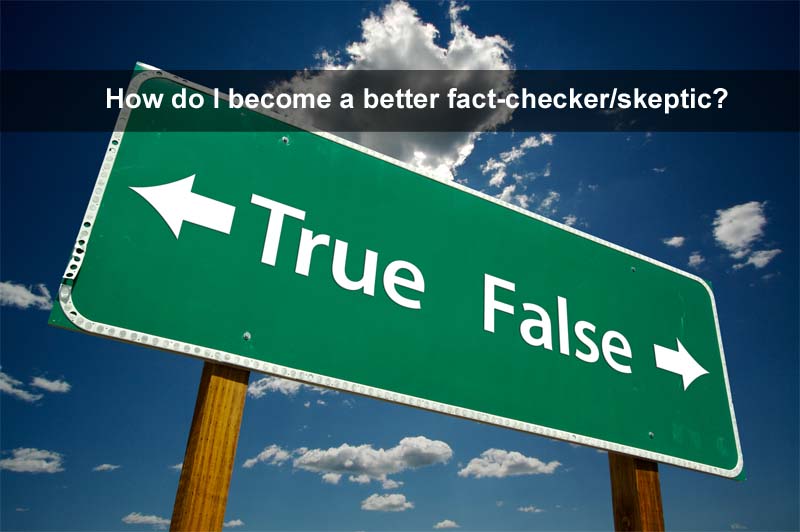 It’s always best to verify something for yourself, instead of relying on someone else to verify for you. Years of encouraging people to effectively outsource their independent fact-checking to a single website has resulted in an erosion of independent thinking, verification, and personal responsibility. When a person fails to fact-check for themselves, they leave it up to someone else to tell them how to think – sometimes on important issues. This is a very serious problem because it also means misinformation or incomplete information is being substituted for more informed decision-making processes. Too many people over-rely on a single “fact-checking” website and automatically accept what it says, as if it was the sole arbiter of truth. This is a dangerous trend that ultimately results in false information spreading faster than truth online. Let’s talk about how we can be better skeptics and perform great independent fact-checking.

This is a response to a question sent in by a college student from Nebraska. He asks, “is it a good idea to only use Snopes or Wikipedia for college research… and how can I become a better skeptic when fact-checking?” Great question.

Our fact-checking system is broken – but we know at least some of the reasons why.

The way we start to improve our independent, critical thinking skills is to learn and apply basic science. The scientific method is the only consistent/objective system of identifying problems and solutions — and the best tool for fact-checking. Unfortunately, far too many people value personal feelings and political biases over facts. To be fair, both left and right-leaning websites are guilty of picking and choosing “facts” that fit their agendas. The inability to accept truths that contradict pre-existing personal beliefs represents a huge barrier to actual independent critical thinking (people may only look for what they already agree with). Before you research a topic, you must be willing to accept the possibility that you may discover facts that cause you to question your existing position.

The best way to approach college-level science research is to start with an understanding the assignment instructions and the actual focus of a research paper (i.e., topic). Your research outcome (fact-checking ability) will be directly related to the quality of sources you use. Peer-reviewed science journals are obviously going to be a great, high-quality resource to draw from, but a fashion magazine or random internet site isn’t going to be sufficient.

A primary source of research would likely include origination data (e.g., statistics of a survey) and a secondary source of research (e.g., a review article in a journal describing something) might work to interpret data from a primary source. As you can see, thorough research would include studying both primary and secondary sources, in most cases. The deeper you research, the more informed your position will become.

One fault of some educators is that they’ve encouraged K-12 students to overuse Google, Wikipedia, or Snopes – without going any further. This may be occurring with many college professors as well. After all, it’s easy just to do an internet search and spend a few seconds reading the first website result. Unfortunately, too many “skeptics” and “fact-checkers” just stop after reading a single headline or article (some people don’t even read a single article).

Adequate research, on any serious subject matter, takes a lot of time, effort, and expertise. Sometimes, research takes hours, days, weeks, months, and even years. The truth is, some people don’t want to sacrifice the time or work hard to perform independent fact-checking or research (i.e., “it’s too hard or boring”). The more quality sources you study, the better understanding you will have. Dig as deep as you can and never stop at the first step.

There’s no problem using Google, Wikipedia, or Snopes, but they each have specific advantages and limitations. It’s so important to emphasize the reasons why certain sources are more reliable, consistent, credible, and thorough than others. Rather than just tell students they can’t do something, we should explain why.

According to Cornell University, Wikipedia shouldn’t be used as a scholarly research source and they are “fairly certain that your professor won’t let you cite it in a scholarly research paper.” It’s better that you understand why this is the case, rather than just get angry.

Central Michigan University does a good job explaining why students shouldn’t use sites like Wikipedia (by itself):

“No doubt you’ve been told many times by different instructors to not use Wikipedia as a source – some may have even threatened to fail you if they see “wikipedia.org” anywhere in your references list. But it’s hard to pass up such a convenient site! The good news – even though most Wikipedia articles themselves aren’t yet considered reliable enough as sources for a research paper, the References and Notes at the end of the articles may still help you.”

Good research means you’re actually looking at sources, rather than just an opinion article or random commentary. You shouldn’t be citing Wikipedia pages. Instead, go directly to the references and study the direct content. There are many other reasons why Wikipedia isn’t appropriate as a scholarly citation source. If you’re not convinced, even Wikipedia’s founder Jimmy Wales “tells students not to cite Wikipedia” – that’s pretty interesting (Harvard).

You will also find this quote on Wikipedia‘s official site — “however, citation of Wikipedia in research papers may be considered unacceptable, because Wikipedia is not a reliable source.”

Sometimes, it shocks students to learn that their professor or college department prohibits them from using Wikipedia as a scholarly citation source. This is understandable, if you consider what was previously discussed in this article.

Educators have spent years overemphasizing Wikipedia and Snopes, without emphasizing their limitations, so much that students and the general public get used to the bad habit of outsourcing fact-checking and traditional research to a few seconds and a single website.

The same standard for verifying claims and sources applies to any fact-checking website, including Snopes. It’s interesting that Wikipedia has a limitations statement/page, but Snopes doesn’t appear to have one.

What’s important is that fact-checkers go beyond just reading an article, specifically checking all of the sources directly. Snopes (by itself) isn’t a sufficient scholarly citation source that should replace more rigorous, expert resources, such as a peer-reviewed science journal or book authored by a credible scientist. Snopes seems to be good at debunking urban myths and other general conspiracy theories, but this doesn’t mean it should be the sole source of truth for everything and anything on the internet.

Biases are commonplace online. Unfortunately, bias can find its way into “official” sources. This is why it’s important to recognize bias and consider how it might skew a source. Examples of bias include: financial conflicts of interest (e.g., company paid for favorable outcome of article), personal feelings (e.g., a best friend reviewing another friend’s article), religion, and tradition. Bias is especially present in political news stories. You will get better at detecting biases with more practice.

Biases are also the cause of something called an “echo chamber.” The internet is an information paradigm for scientists – meaning more distractions and not necessarily more good information. Let’s talk a little bit about this growing problem and how you might avoid it.

The internet echo chamber is one of the main enemies of modern science, critical thinking, independent thought, and open discussion.

Basically, an echo chamber as a system where like-minded people tend to pass around (perpetuate) their own beliefs so much that they isolate themselves from any outside opinion. It’s important to emphasize that an echo chamber really only perpetuates its own idea(s) of truth, even if it’s not true, and often to the point of attacking anyone that challenges it or presents conflicting evidence. Some studies have shown that highly social people and the young are especially vulnerable to internet echo chambers (MIT)

If you find yourself in an echo chamber, you will likely be pressured into accepting a position, just because it’s the popular position of a majority within the echo chamber itself. You may also become afraid to share a different opinion, if you’re inside an echo chamber – out of fear of attack or isolation. Little to no actual science or critical thinking exists in echo chambers, ironically. Internet forums and social media represent the most popular tools used by various echo chambers.

The best way to avoid bias, echo chambers, and other poor sources is to practice using a systematic approach to doing your own fact-checking and research. One easy way to remember how to fact-check something is by using memorable neumonics, such as C-R-A-P.

Imagine how much we could accomplish, if we could reduce fake news and increase the quality of independent thinking. No matter what industry you’re in, there’s always a best practice that helps ensure maximized results. Being a better fact-checker or skeptic means consistently using independent, critical thinking skills and multiple high-quality resources. New York University has a great example of how you might look for truth in a web full of fiction – just use the mnemonic C-R-A-P.

As you can see, CRAP should be the mnemonic you think of – apply it to every claim, article, new story, and advertisement. By the way, CRAP applies to any and all fact-checking websites, including Snopes and the very site you’re on right now. Always think of C-R-A-P.

The most important thing for a good skeptic is to remain open to evidence-based science, value objective facts over personal feelings, consider using only appropriate sources, recognize bias, and avoid internet echo chambers. A good skeptic must be willing to accept challenges or new information – even if it causes you to question your current position or beliefs. Make more informed decisions and see how it improves your life. It’s a good idea to also support high-quality scientific resources, books, blogs, and podcasts. As you now know, America is in desperate need of qualified subject matter experts to share insight and function in important decision-making roles.

Our best decisions (and quality research) comes from being informed, which means we must be willing to take the time to do our own fact-checking, not outsource it to someone else. No source is above questioning and you should always investigate the claims of an article – read the sources.

Fake news isn’t going to stop or reduce in frequency, until more individuals take back personal responsibility and use their own critical thinking skills to determine facts from fiction. Relying on a single fact-checking site as the sole arbiter of truth is dangerous, irresponsible, and likely presents a future liability issue – regardless of the popularity of the site.

Thanks for the question. We hope you found this article informative and helpful. If you’re a college student and have a question about science, technology, classroom practices, studying, textbooks, or other industry topics, contact ULTRA TechLife. We may feature your question on our website. Support science! Like and subscribe to our social media – Facebook and Twitter launching July 2018.