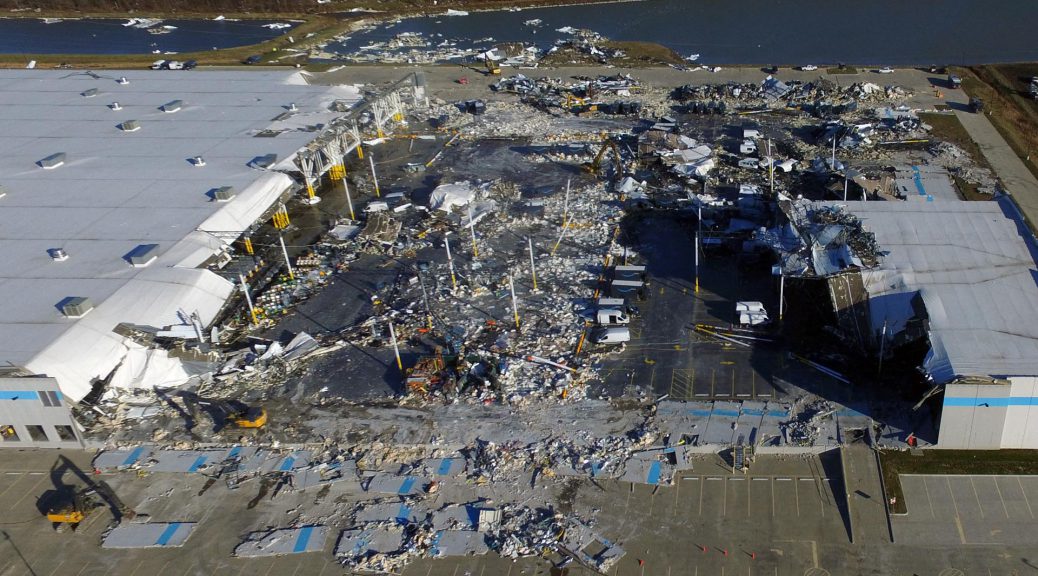 You’re not an employee, there’s little to no safety training, and what do you do if you’re in the path of a tornado while driving? It’s a conversation that needs to take place. A strong tornado killed six people at an Amazon warehouse in Edwardsville, Illinois. On December 10, 2021, around 8:38pm local time, a strong EF-3 tornado (winds between 136-165 mph) caused significant damage to the warehouse, including the collapse of the warehouse roof and walls. This is an example of workplace safety, and a good example of a void that exists within the gig economy market.

The gig economy introduces new opportunities and challenges, some of them involve companies taking advantage of people, getting cheap work and offering almost nothing to those delivering food, driving people around, or delivering packages. These people are often not considered employees, have little to no benefits, and are basically on their own. While this might be good for some people that need quick money, it leads to ethical concerns, including lack of safety, no insurance, and possible liability issues.

It’s no surprise that when a tornado hit an Amazon warehouse, it just raised more questions about how the company deals with employees and safety. No doubt, many companies have a focus on profit, to the point of ignoring employee safety. This is a disaster waiting to happen.

Tornadoes are not entirely rare. There are a lot of conversations going on but not very many people are discussing what you should do if you find yourself in this situation. For example, what if you’re an Uber driver and there’s a tornado warning?

Should you even have to ask someone else if it’s ok to take cover to save your life?

What should you do if you’re in a car during a tornado?

A car is one of the worst places to be during a tornado. If there is a tornado warning and you are in the path of the tornado, you should immediately find sturdy shelter, indoors, underground, and away from windows. If that’s not an option, try to find a ditch and lie flat – while covering your head – and don’t forget about the possibility of flooding. A tornado shelter is one of the best places to be during a tornado.

Ideally, you want to beware of the weather forecast for the day, especially if a tornado watch is issued. Have a plan of action and know where to go ahead of time. Generally, tornado warnings give people a decent amount of warning time, but you should never wait until the last-minute. Always heed watches and warnings.

When your life is in danger, you need to first be concerned with yourself and take cover. Legally, a life-threatening situation requires immediate action. A tornado warning is not the time to start calling your boss and asking if it’s ok to take shelter. Never hesitate to save your own life.

Taking cover is temporary. The temporary delay (just a few minutes of waiting in a safe place to allow a tornado to pass) should not require asking for permission to save your life.

Large corporations need to ask the question – what good is a dead delivery driver?

A Verge report confirms advanced warning, stating an Amazon driver had a tornado warning conversation at least an hour and a half (90 minutes) before the tornado hit the Amazon warehouse.

Just as a side note: If you are not in the path of a tornado, and if you’re not in the path of severe winds or hail, simply waiting in your car at a gas station or somewhere off the road (shelter in place) is a legitimate option. The reports of a dispatcher telling a person to do this would not be incorrect, in the right circumstances. However, if you are now in a safe spot but then decide to/are asked to return to the factory (in the direct path of danger), that’s a bad idea.

There are some reports stating employees at the warehouse knew about possible severe weather that day, including forecasters saying strong tornadoes were possible. Unfortunately, the 1.1 million-square-foot warehouse roof collapsed, leading to its concrete walls to collapse inward. This may also explain why some were killed while sheltering in the bathroom. Without a plan of action, a lack of adequate shelter, and waiting to the last-minute you’re setting yourself up for a disaster.

After reviewing warning data, it appears as if the Amazon warehouse situation had approximately 60 to 80 minutes of advanced warning. Unlike a general tornado warning, when a confirmed damaging tornadoes is occurring, meteorologists issue specially worded warnings, a call to action statement. There should be no doubt or hesitation in these situations.

A large corporation with over 100 employees at a location should have a warning system and safety plan in place.

Profit is a powerful motive. Too many corporations lose focus on employees, long-term image, and treating customers as stakeholders. The result is a careless, greedy, unsafe environment that exploits anyone it can – just to maximize its stocks. Prevention is the key to solving workplace safety issues and that cannot happen without realizing success is more than just profit and reach.

Some of the decisions made by Amazon may involve contracting factors, which could change how liability is viewed. If they were full-time employees, including covered by health insurances, if actions of the company led to forcing employees to work in unsafe conditions that would knowingly lead to death (confirmed deadly tornado, told to continue working, not shelter), then they could have been open to huge liability lawsuits. This is a whole conversation that will probably take place, especially as lawmakers react as they usually do – more laws, reaction, and little in the way of preventative actions.

Either way you look at this situation, many questions are being asked and there are very few answers. Amazon has not responded to requests for comments regarding the deaths at their warehouse or the claims of employees about being told to work or risk getting fired.

The meteorologists involved in the tornado warning process performed well during that night. Our biggest problems involve preparedness, poor infrastructure, workplace safety issues, and just people not heeding warnings. Unfortunately, at least 90 people died that day. Again, this is not a National Weather Service failure, it’s a much more complicated issue that involves corporate ethics, workplace safety, vulnerable populations, infrastructure, and personal preparedness. When an employer is operating unethically, it certainly could contribute to a lack of personal preparedness and ultimately unnecessary death and destruction.

Author:Ben Alonzo is one of the world’s most unique science and tech experts. He founded ULTRA TechLife and is the CEO of the tech firm Storm Sector, LLC. Ben holds an MS in Information Technology, MS in Geoscience, MS in Health & Nutrition, and a BS in Geoscience. He is a highly rated professor that teaches a wide variety of college courses within earth and environmental sciences as well as within computer sciences and public health. His diverse background spans information technology, cybersecurity, healthcare, weather forecasting, consumer electronics, graphic design, web development, and business leadership. He holds numerous professional licenses and certifications, ranging from information technology to healthcare and emergency medical technician. Ben is a tech entrepreneur and is business partners with multiple restaurants. He is a fitness pro, health scientist, a licensed private pilot that loves flying, and enjoys independent filmmaking. He has written about science and tech for over 10 years. You can see some of his past articles on the Houston Chronicle, Heart, and other networks. In his free time, he likes scuba diving, storm chasing, traveling, making music, and drones. More about author.